Change Is All There Is
With St. Germain
Written By Phillip Elton Collins

Humanity no less than the world and universe around itself is subject to constant change. When all human bodily changes culminate in a final event it is called death. In actuality all changes from young to old, health to sickness are an ultimate process to death. Does not the baby “die” to grow into the child and the child “die” to become an adult? Every seven years the physical body completely transforms due to a process of cellular development. Human blood cells have about a one-month life span and then die in the spleen. Thus, human life lives by dying daily with few noticing these minor deaths. Only when the final death of the body comes do most take notice. All this constitutes a continuous series of changes which are as inseparable as they are natural.

When you consider the billions of life forms that have died on the surface of this planet you could think of the planet as a constant huge cosmic cemetery or a laboratory of growth and expansion. As most humans have observed all living forms on the planet are engaged in a perennial flow of change involving a spiraling wheel of life and death, to be reborn again. Time itself illustrates the universal flow, the cosmic change of everything which are but other names for death allowing change. 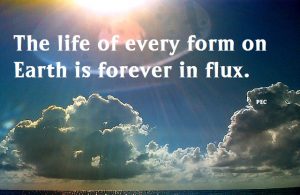 The life of every form on Earth is forever in flux. The stamp of mortality is imprinted upon all bodies; all are subject to this divinely ordained unending process of birth and death to rebirth. Within the dense dimension where humanity resides at present there is no escaping this flux which is the first and final feature of all existence. Eventually as a result of the ascension process of the planet (transmuting to a higher frequency) all beings upon and within this world can also shift (die to be reborn). Change is the one certain thing which does not change. The ceaseless changes within the universe might well make one ask whether change itself is not the ultimate reality. It is for creation is change! Through change there is growth, expansion and ascension. If everything remained the same it would eventually decay and die upon itself.

All this change may induce a question. What is the universal law behind these endless changes? This ceaseless interchange of particles, not merely within the same body but also between different bodies, means that nothing can really claim as its own a single particle of its body; because every particle belongs to ALL THERE IS (Oneness), since constant death is followed by constant rebirth (activating the Universal Law of The Circle of Life). Thus, the circle of life circles infinitely applying not only to humans but all aspects of nature. The universe being what it is death cannot separate from life nor destruction from creation. Remember, nothing in the world perishes and death is not the destruction but only the change and transformation of all things. 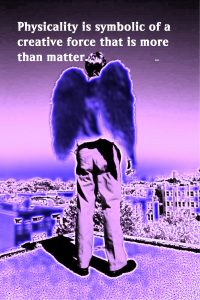 The activity of the universe executes a perpetual cycle because it is the fundamental meaning of manifestation to be a living process. Physicality is symbolic of a creative force that is more than matter. Death is a transformation (not an annihilation) streaming ceaselessly through a myriad of forms and lives. Can we assign any beginning or end to this universal life-stream? We cannot not. All forms inherited its existence from another one which preceded it. The living spark that flows through this discussion is as beginningless as it is endless. The life-principle is greater and wider than the forms which it takes. It is a hidden driving force. The essence of this eludes us because it is infinite and unconditional. Although present in all atoms and all individuals it is not itself atomic or individualized. It is present in a thought that no finite thought could ever perceive.

The life-stream is always being itself, the only reality, the only true eternity. But life is a twin because intelligence is always found alongside it. Life and mind (see previous discussion — The Higher Realms: In The Spirit World) are inseparable. Hence, mind is equally the real and the eternal. Since every embodied creature (in this frequency) is subject to death that eventually follows birth and yet bears a mysterious life-essence which is not subject to this limitation, then one’s experience as a flow of changes becomes intelligible. For it is known that changes are only because of the subconscious contrast provided by the existence of the hidden unchanging observer, which is always present alongside with each experience. And whatever does not change does not die. Thus, the idea of immortality arises for one because there actually exists an immortal principle within everyone.

Is there any analogy which helps one understand the above difficult points? There is. Science has taught that there is nothing in space which is not perennially moving. Movement is thus the heritage of all existence. And movement means that something has passed from a particular point in space to a different one. But such a passage is only possible when it also occurs between two different points in time. There one is compelled to recognize space, time and motion as inseparables. Thus, whatever moves must move spatially. And as its path is finite it cannot escape from its starting point but must eventually return to it. The universal life seen through its innumerable manifested bodies is forever entering and leaving like the water in the waves but seen as it really is in itself forever constant and homogeneous like the ocean (the Oneness and eternal renewal of life).

To reiterate, life is the repeated embodiments of all individuals, not only does life like a circle return whence it arises on itself but like the entire universal movement is ultimately a circular one, actually a spiral. 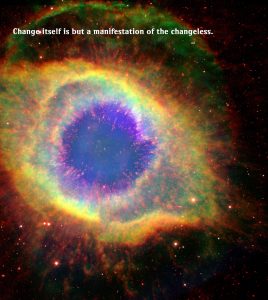 The incessant inter-atomic movement of everything should suffice to demonstrate that substance is living substance, that there is nothing really dead in the universe whatever its appearances may be. The world and you are in a living process. The universe is vibrant and alive. Death touches its appearance only and is the gateway to a fresh rebirth. Change itself is but a manifestation of the changeless. This is the meaning of the procession of ever-active change that surrounds everything. And because the principle of life is itself a power belonging into the principle of universal mind whose essence is a deadless one, even your individual failure to know its existence does not deprive you of sharing in its immortality.

If death in the immediate and individual sense is to be seen all around you, it is not too much to declare that death in the ultimate and general sense is a notion utterly foreign to the human who perseveringly pursues their inquiry into the meaning of the universe and courageously faces all the inconvenient questions which arise on the way.

Death as the most critical of all forms of change is the necessary price every incarnate pays for living in the space-time world. But death does not speak the last word. For the twin truth to all this must clearly be that an existence which is formless and timeless, which is in the being rather than in becoming must be an immortal one!