The higher beings who are central to this story suggested that I start at the beginning. While the beginning may feel a bit like a cliché, I assure you it is the only thing about this story that is.

You see, I was in a dusty old thrift shop, the type of place that is primarily defined by its smell. For me, shopping in such a place meant escaping the American retail industry with its inflated prices and lack of customer support. Also I loved the idea that the clothes and books I would buy there, if I did, had a history—one that might continue after me. Or maybe I was just being cheap. Over the years I have bought some great stuff in thrift stores for little money.

On this particular day, I went to this “other people’s things” store to look for a warm jacket since South Florida, the area encompassing Miami, Fort Lauderdale, and Palm Beach, was having the coldest winter on record. Ever since retiring from the business of film making, I have spent summers in New York City and winters in Fort Lauderdale, and I had left most of my winter garments in my apartment up north. I didn’t want to replace my entire wardrobe; I wanted something inexpensive, yet effective, to get me through the cold snap. Suddenly, an inner voice—not my own—directed me, “Go check out the used book section.”

Well hello there! I wasn’t that surprised to hear a voice speaking to me. My current profession is as a practitioner of healing arts and I’ve had training over the years in various modalities from Reiki and light ascension therapy, to acupuncture and homeopathy. As an intuitive counselor, I am receptive to communication with angelic beings, which I sense as different frequencies of energy. However, this unfamiliar voice was none I could recognize. An energy of unknown origin, it was speaking to me uninvited and without introduction.

Honestly, what surprised me most was that I knew, from past experience, how chaotic the used book area of the store was. Why was I being led to sort through hundreds of books stuffed into boxes on the floor and haphazardly spread across the shelves like peanut butter on toast?

Then I remembered it was my friend Joel’s birthday. A book would be a meaningful gift for him, but I wasn’t convinced the literature he enjoys could be found in a thrift store. Furthermore, I doubted that I could survive the smell long enough to sort through a bad case of the book piles. Nonetheless, acceding to the guidance I’d received, I took a deep breath, stepped away from the clothing racks that I was rummaging through, and headed over to the used books section in an attempt to accomplish this seemingly impossible mission.

Once among the boxes of books, the same inner voice as before directed me to search a specific book shelf. Feeling like a hound dog hot on the trail of its prey, I knew exactly where to look and exactly what book I would find there. Joel is fascinated by the physical appearances of the Virgin Mary in Eastern Europe and he has visited Megjugorje in Croatia twice. In an instant, my fingers landed on a book of the history of Mother Mary visitations. I couldn’t believe it—or maybe I did. The voice that had drawn me to look in this spot had been so

I pulled the book off the shelf, considering myself very fortunate, and was in the process of turning toward the front exit when my find slipped from my grasp as quickly as it had appeared. While I was shuffling around trying to relocate it, three other books from three different shelves spontaneously fell right at my feet. Although the titles of these paperbacks had no meaning to me, they had something in common; each said something about “Lemuria.” (What in the world was that?) I quickly returned them to their points of departure and found the Mary book.

After grabbing a warm jacket off the rack in the men’s clothing area, I felt my mission was complete. I paid the cashier, walking out of the store with my prizes in a musty plastic bag.

Since I haunted this particular thrift store on a regular basis, in only a couple of 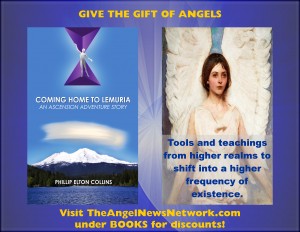 weeks I was back again for another nasal assault and bargain hunt. Interestingly, the very same inner voice I’d heard before greeted me as soon as I entered the shop’s soiled doors. “Go immediately to the used book section,” it said. But I was there to find a warm shirt since the cold winter weather was continuing. I was inclined to ignore the suggestion that was being made to me.

“Never mind the clothes,”  the voice insisted, “you are not here for that. Go to the books.”

Okay, then! Like an ancient warrior following orders, I placed myself in front of the same bookshelves as on my visit two weeks prior. “Why am I here?” I asked myself as well as the inner voice. As if in reply, and without me touching the bookshelves, the exact same three books I’d knocked off the shelves before began to fall in succession directly onto my feet from three different shelves…thud, thud, thud.

That was strange—and, ouch, I was wearing open-toed sandals!

Seriously, hearing inner voices has become a regular occurrence in my life since I became a healer. But flying objects?

Then, oddly, I began to feel as if the inner voice I had heard was literally speaking to me from inside the books. (Whose voice was this?) None of it made sense. How could three books fall from three different shelves, without assistance? And hit me two weeks in a row? Wow, somebody or something must have really wanted me to read these books!

Looking down at the first book, I saw that there was a picture of a mountain on the cover. I recognized it as Mount Shasta in California. Ten years earlier I had been to Mount Shasta with Joel, the friend for whom I had bought the birthday book about the sightings of Mary. That had been a wonderful vacation. The title of the book read Telos. Okay. But this was a bit confusing. The word “Telos” had no connection to the trip I’d taken to Mount Shasta or to my life in the present. Furthermore, I was unfamiliar with the name of the book’s author, Dianne Robbins.

Continuing my investigation, I saw that another word, “Lemuria,” appeared on the cover of one of the other two books. I vaguely remembered from my metaphysical training that Lemuria was a possible ancient civilization. I’d taken a trip to Egypt led by one of my spiritual teachers. In Luxor, outside the famous temple of Karnak, there sits an enormous boulder that my companions told me was a crystal remnant from Lemuria. I hadn’t learned too much from them, except that Lemuria was supposed to have disappeared like Atlantis.

A thrilling emotion came over me; every hair on my body was standing on end. Somehow I knew I was about to begin an amazing adventure…

I gathered the books off the floor and held the three volumes next to my heart, feeling like I had just found the proverbial goose that laid the golden egg. I rushed to the checkout counter to pay for them. They cost seventy-five cents each. “A treasure for pennies,” I thought without knowing why.

When I got home I became consumed with reading the three books. My speed-reading skills from high school sure came in handy. I zipped through all three in a day or two, and then read and re-read Dianne Robbins’ book again and again, feeling mesmerized. Somehow the amazing things I was reading felt like a distant memory being awakened. Her book began with comments from a spokesman named Adama, who started out by saying that he and others living in a hidden world on Earth were bringing humankind the “memories of Lemuria.” (Was this Adama Adam from the story of Adam and Eve? Was Lemuria the Garden of Eden?)

Adama, a being from Lemuria who was channeled by Robbins, went on to explain that even though human memories of his extraordinary civilization have been lost for millennia, it is time for our two civilizations to become united. (Where was this unseen world? Why was this information coming forward now?) Even though none of this remarkable commentary made sense, it felt true. It resonated with me on a very deep level.

So I continued my studies…

The first thing I learned from Robbins’ book, Telos (Trafford Publishing 2008), which is subtitled was Original Transmissions from the Subterranean City Beneath Mt. Shasta, that Lemuria is located inside the Earth. Now how was that possible? Everyone knows that the interior of our planet is molten rock! Who or what could possibly live there?

At first glance, this book came across to me like the recollection of a sci-fi adventure story about an expedition to the interior of the Earth. It sounded like a Hollywood script. And I should know, as I worked in Northern California for many years for George Lucas of Star Wars fame. 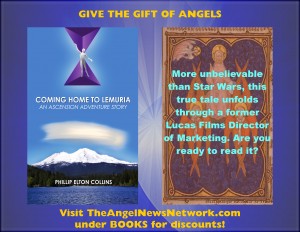 My mind began to discount the event in the bookstore and to challenge the entire experience that was unfolding as I read the book. “This is crazy. You are literally going crazy,” I told myself repeatedly. But my heart would not let the idea of Lemuria go. Who was it that said, “The heart knows and the mind believes”? The feeling I got from my heart kept saying, “Trust this, it is true. You are supposed to know this information for a reason that will be revealed.” I thought for a few seconds to set the books aside and forget the entire matter. But I could not.

“Stay open,” the inner voice of my unseen companion commanded me.

I decided to Google Lemuria. All I could find out was that through legends we were told it was possible that a huge continent that existed some twelve thousand years ago was lost after submerging off the coast of California. This idea had been circulated by the Rosicrucians, and the acclaimed seer Edgar Cayce apparently had a few dreams about it. There seemed to be little physical evidence that this place or other places of this kind, like Atlantis, ever really existed.

I have worked with the human condition in clinical settings for many years. The relationship between the human mind—our thoughts and emotions—and the physical body is central to my work as a healing arts practitioner. I know what delusion is, and denial. But somehow, perhaps since I felt such a strong connection to this new world coming into my life, I trusted in its reality. If I was crazy that would be revealed in time to me and others. It was now appropriate to let go of my concerns and enjoy the journey of discovery.

If madness felt this good, then bring it on! I had never felt this happy in my entire life. Even though my life was already filled with love, happiness, and personal and professional fulfillment, in some not-so-strange way I felt I was coming home to an exceptionally more evolved home—an unseen reality—than the world we live in and ordinarily recognize as real. 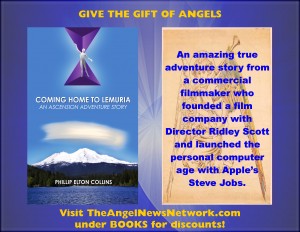 There was a quality to the voice I was hearing that was different from the angelic voices I had previously channeled, a quality that led me to believe that the voice speaking to me was this same guy, Adama from Lemuria, who Robbins had channeled for her book. Recognizing that it was time to establish direct communication between us, I decided to ask. “Are you Adama?”

“Yes, I am,” he confirmed. “Through me, our world can be revealed to yours. You will come to know the truth of Lemuria.”