During physical life an individual lives within the third dimension of their emotions creating their thoughts creating their reality. When they leave their body (die) they transcend into the next dimension called the fourth or astral.

New information for many is the truth that there is no need for the mind to lose (be lost) its own existence when the five senses stop when an object of its consciousness like the physical body dies. Physical death cannot eliminate the mind itself (being independent of the physical brain). A person is receiving thoughts from the independent non-physical mind that the brain receives during physical life. Knowing these things, why should anyone fear death?

The world, one’s reality, exists inside a person’s consciousness and therefore cannot be lost at death. The mind will come into spatial manifestation once more when consciousness resumes after death. In this reality a person’s knowledge survives after death. This is humanity’s victory over death! Remember, the mind itself (apart from its contents) is not in time and is not limited to time sequences. Thus birth and death, which are ideas completely dependent on time cannot apply to it. So in reality the mind is immortal since time does not effect it. 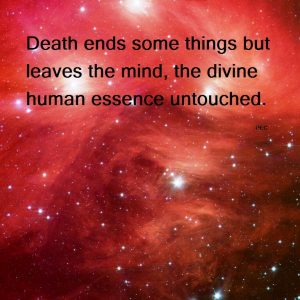 Remember the mind existed before the birth of the physical body while the body was waiting for the completion of its form. Death ends some things but leaves the mind, the divine human essence untouched. This truth allows an individual to know that death does not end all.

When the period of post death unconsciousness ends, consciousness slowly returns not unlike the gestation in the womb. The individual begins to experience a self-centered, external world. But what is felt as external is actually internal. Things seems very much like the dream state when alive, space is not physical but mental.

Let us change the ‘where’ we are after death to ‘what’ we are after death. The spirit of the recently dead person does not reach this ‘other world’ by any sensation of spatial movement. It is reached by a change in consciousness, knowing the mind remains and gives birth to a new and different state of beingness. Remembering the earthly dimension is a form of consciousness so the next dimension after death must also be a form of consciousness, not a place. The mastership of the mind is that it can create its own world by its own manifesting powers. So whatever dimensions and world that exist beyond this one they too can only be mental ones, forms of consciousness (states of being).

While the spirit’s state is likened to that of a dreamer, there are some essential differences: (1) It is longer; (2) the illogical sequences of dreams is not found there. Things are presented in a ‘divine order’. The world of the disincarnate spirit (an imagined one) feels very real as the one just left. The experiences in this new world pertain solely to the spirit’s own person, not others. Just like dreams, the spirit world is a private one with all destinations ending in Creation itself. The spirit has begun a sacred journey to the unified, oneness connection with Creation itself. The spirit is no longer in a public world as on Earth.

Waking, loving, dreaming, creativity and spiritual experiences are all ingredients in the make -up of existence. The after-death life sees itself as if they were external to itself, seeing people through images constructed via their subconscious utilizing emotions, thoughts from its physical lifetime.

The ‘average’ person’s experience within their post death spirit life will be a mild mixture of good and bad and should not expect anything too dramatic to occur. The halls of ‘hell’ of the wicked and the ‘heavens’ of the heavenly are fairly sparsely populated. The new arrival will most likely fall into a state which is hardly different from that of an uneasy sleep. During these prolonged spells of awakening the individual recovers much the same personal consciousness, emotions, thoughts, desires which they possessed before. There seemingly is no major change in the person, memories of the past return, they find it hard to believe they are really dead. All this becomes an extraordinary dream that is pure spirit existence. 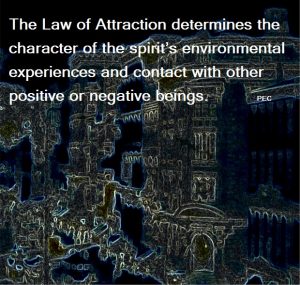 Now for the others who have been particularly good or bad, there are some six fully conscious states in one of which the spirit will find itself by an universal process of natural attraction and mental receptivity: three being dense and dark and three being of a high frequency and light. There is a seventh and intermediate state that lies between the two aforementioned states. This seventh state is the one most people pass into at death. Each state measures a different intensity of moral character, with the lowest state being a sphere of the absence of love (hatred) and the highest state is a sphere of love (blissfulness). The forces of moral attraction and moral repulsion (Law of Attraction) determines the character of the spirit’s environmental experiences and contact with other positive or negative beings.

In the lower states the spirits become victims of their own extreme selfishness and addicted vices, (remember the spirits are dwelling in a world very similar to their dream state when they were alive). The spirits dwell surrounded by the most divine spheres to which only a change of thought is necessary to lift them but they can ignorantly remain in their own hideous creation if they so choose through their free will. The spirit’s imagination eventually wears itself out with their struggles against its own self-centered phantoms and finally it perceives the truth that ‘hell’ is simply the hunger of their own unsatisfied passions and eventually releases them. This act teaches the spirit to keep their negative aggressive behavior close at hand and ascends/liberates the spirit to a higher frequency humanity’s ascension process continues in spirit as well as human form).

An essential lesson learned is that the next world is not a physical location/place but a vividly prolonged mental experience (but like all mental experiences it can contain people and locations within itself, and are real enough while it lasts). The universal truth is that what organized religions call heaven and hell is not a place but is a state of mind. To say they are a place to possibly arrive at is a way of fear and control.

A historical example may help at this time which can apply to some of your current events at present. The Nazi Germans who were filled with the passions of greed, cruelty, hatred and conceit, in the spirit world were tutored in a most effective way. They were destined to undergo a veritable nightmare in which they experienced in prolonged form the ‘living images’ of the agonies they had brought to others. They became the scarified victims of their own debased thoughts and actions.

Those who denounce the ‘doctrine of purgatory’ as mere superstition or religious dogma are only partly right for there is a state of moral instruction for humanity. The state of ‘purgatory’ described here is only a temporary condition. In the divine order of creation there can be no dreadful doctrine of eternal damnation for there is a divine eternal spirit within each human. Each individual is within a personal process of ascending into that state of being.

What the spirit passes through in any of the after-death states is largely determined by the general tendency or habit-energy of what is thought, believed, desired and understood during its Earth life. There is no reason why anyone who wants to have a blissful time in paradise cannot create that. You can create happiness in a dream while alive so why not as a disincarnate spirit? The after-death state allows humanity to realize (for a limited time) their dominate desires. Human emotions and thoughts will inevitably manifest to the mental sphere most in accord with them. In effect, the death-world is a subjective one and evolves out of one’s own imagination.

There is always an end to the dreaming sleep during Earthly life and there is always an end to the dreaming activity of spirit life. Permanent union with others exists only in finding the enduring self (Creation is inexorable). The passage from this dream intermediate state to the next one, which is that of blissful dreamless sleep, is similar to the swoon that takes place from the physical life to the spirit world. The spirit now enters and dwells in a condition which is equivalent to what is formerly known as a deep slumber when alive. Here the spirit finds a merciful rest from the burden of personal consciousness, an utter oblivion of the self-centered memories, joys and pains which have accompanied the spirit within earthly and unearthly existences.

The question commonly asked is whether it is possible to communicate with spirits whether through seances or other settings with professional mediums. The answer is that under abnormal conditions you can succeed in doing so. But in most cases, it is unlikely that the communication will be the spirits of those whom you believe them to be. Both the requester and the medium are usually ignorant of the working of the deeper layers of their own minds, an ignorance which often causes them to ascribe to a spirit words and visions which emanate from themselves alone.

By the grace of the eternal spirit or by the force of great love genuine communication is sometimes affected through a medium and can bring great comfort. At a minimum such contact proves to some that there exists a world beyond the one they presently reside within. But keep in mind, just as living humans are not ordinarily aware of the dead-life, so the dead are not ordinarily aware of the living. A factor in this non-awareness is that fact that time and space are elastic, they will differ to different beings in different planes. There is no fixed space and no fixed time beyond the realm of the living. And to further complex the matter, different kinds of living creatures have different kinds of space-time perceptions. 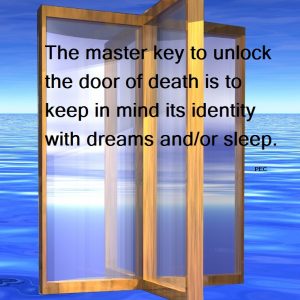 The spirit does not usually understand that their world is a dream world (and mediums do not know this either). Each spirit will have their own private world just as each living dreamer does. Therefore, there may be as many million spirit worlds as there are spirits. Thus, this discussion has been an outline of the general conditions in which a spirit can find itself and the general destiny which faces all spirits at the end of a certain period.

The master key to unlock the door of death is to keep in mind its identity with dreams and/or sleep. Remember, mind is immortal, it remains untouched despite the physical body’s death. You have no more reason to fear its death when the body is destroyed than you have to fear its death when you retire to sleep at night. Sleep affects the body but leaves the mind as active as ever in dream. Death works upon the human being in a somewhat similar manner and the experiences which come to the soul after the body has died are nothing else than prolonged vivid dreams or unconscious deep sleep. If you can take a benign rest from all the challenges of living personal existence why not enjoy the same deeper rest called death. That within you that can survive dreams and sleep in the living world can likewise survive them in the after-world.