This entire discussion is simply meant as a clarification and promise to humanity. If life is designed with transiency, death is so designed too. The one is thus always a preface to the other. If anything changes and transitions away, this is only because it turns into something else. 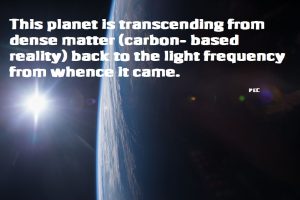 The universal proclamation is that life an ever-active becoming, leads one to ask: Is there a changeless existence anywhere? And there is! Humanity can liberate itself from the repeated incarnational cycles by increasing their consciousness and frequency vibration (through a deep examination of self via a personal process being gifted to humanity by higher realms now) to ascend to a higher frequency of existence which is the destination and destiny of all humanity. This planet is transcending from dense matter (carbon- based reality) back to the light frequency from whence it came. Thus, each life form on the surface of this planet is given a choice through their free will to ascend with the planet. That ascension process is taking place on this planet now being led by the ascended mastership of higher realms who were once human themselves. Remember an ascended master I myself, St. Germain is leading this discussion. Humanity must evolve/ascend or degenerate. This divine ascension process is the true divine rebirth of humanity. 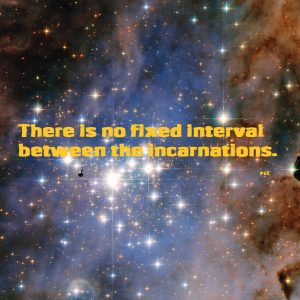 Meanwhile back to life cycles here: Karma links an act to its consequences less because of the fact of reward or punishment than because of the facts that mind is continuous and that all things are ultimately mental things. There is no fixed interval between the incarnations. The individual karma, modified by the evolutionary karma of the planet decides its length in each case. Consequently, a person might be reborn after one year or after a thousand years. But a new body cannot be taken until the flesh has totally turned to dust. It is a wise decision to cremate rather than bury. As discussed earlier, the marvel of rebirth is no different than waking up each morning while alive. Knowing the inevitability of repeated human re-embodiments and the possibility of ascension to a higher frequency, again, allows no need to fear death.

Assimilating all shared here, you can end the weary cycle of reincarnations by taking one of three paths:

(1) You may elect to merge finally and forever in the universal mind by healing the unhealed ego and self and merging with cosmic love into the ascended masters realm and serve the planet from a higher realm.

(2) You may leave this planet (becoming a star) for a higher one where the forms and grades of life are of a higher frequency. There are other inhabited worlds some lower and some higher than this one within the universal evolutionary scale. Any human being who has developed so highly that they have personally outgrown the usefulness of Earth have earned the right to reincarnate on a planet with more advanced beings.

(3) You can decide to abandon any rewards and remain here in constant reincarnations to help those grow out of density and ignorance. Many of your master teachers and messengers chose this path.

It is time to know that death is the eternal friend of humanity and not the bitter enemy or some form of punishment. After ‘love’ the word ‘death’ is the most misunderstood one in the human languages. Perhaps this discussion can and will change any misunderstanding.