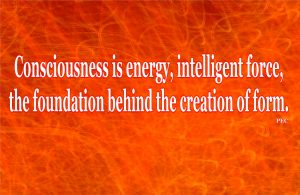 Higher realms teach us that consciousness is already conscious; it is the eternal unmanifested, and always existed. Consciousness does not exist in time nor space and has no evolutionary process since it was never born and does not die. When consciousness creates it appears to be under the same constraints as us but it is not. We humans are not advanced enough at present to fully understand conscious process but let’s attempt to explain the unexplainable:

Consciousness is the energy, intelligent force, the foundation behind the creation of form. Consciousness has been manifesting forms for billions of years so that it can express itself through them in form. In effect, consciousness ‘incarnates’ into the manifested 3D dimension and becomes form.

Planet Earth has served as the home of the human ego that represents the final stage of our waking up, the identification of consciousness with form. For this planet it has been a necessary evolution of our consciousness. We are one of the densest creations in our galaxy. We chose this as a final healing/mission within this aspect of the universe.

Our brains are a receiver of consciousness, they do not create it but it is who we are and we can never lose it but we can choose not to use it.