To find peace within us let us connect with our inner wounded child that feels threatened and wants to survive at all cost. This wounded child is attached 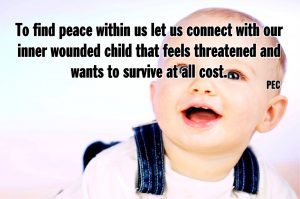 to the drama to assert its identity as the winning hero. The world is often led by wounded boys and girls leading us into inhuman wars. This inner child feeds on the drama and wants the conflict. Can we become aware of this wounded being within us racing to defend itself, judging, shaming, blaming and attacking? The task is for us to awaken to the needs of this child by asking him or her what they need from the adult us, thus allowing us to move beyond our unconsciousness. That unhealed aspect of ourselves would rather be right than have the peace that we are healing as a human species.