Long before we were human, husband or father or friend we were eternal brotherhood spirits within the mist of eternity. Then our consciousness began to coagulate to once again become human. 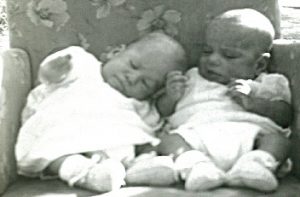 We were and are two different spirits who were choosing to incarnate in unity on this Earth within the mystical geo-region of southern Georgia. We had birthed together before. This time we were selecting a vibrant and beautiful feminine- mother energy named Joyce Roslyn and her masculine-energy mate Robert Eldridge, as father.

We knew we belonged to each other as unified diversified expressions of being human. One the physical expression, the other the mental. He would climb the kitchen cabinets for the cookies and I would explain language. Together we could and would complete a whole, while separate we would always be somewhat incomplete. Thus, the reason for the choice we made to be born at the same time.

On the outside we appeared very different: one the expression of our native American heritage, the other reflecting the European Irish. But within, the energetic inside things were vastly different. We were eternally united.

As we grew, we were taught to be fearful of our needed unity and sought ways to separate. Prevailing culture and mores of the time said it was unhealthy to be so close. Then we began to activate all the ways we could be different, knowing inside we were diversified expressions of one another.

Because of our unconditional, eternal love we fully accepted each other’s developed differences and celebrated them in one another, being secure in who we each were.

To fully express our diversity, we physically went our separate ways. I out into the world and he staying closer to the portal of our home and parents. Twin brother, William Ogden needed the bonds and boundaries of our earthly home and I, Phillip Elton needed to break free, to be me. But in our hearts, we knew we were never separated. For you cannot separate spirit. 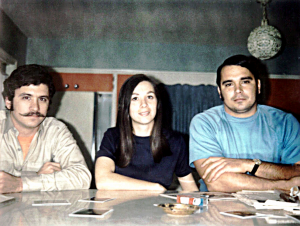 We went on to fully express the myriad of ways in being human, being a human being. He became husband and father in a more traditional way and I chose ‘two-spirited’ expressions of love. But love is love no matter how we choose to express it. In the end, the differences of expressing love only matter in matter, not spirit.

About twenty minutes before I received a phone call from Mom saying my soul-mate had been killed in an accident in the bayous of Louisiana, I woke up and realized my twin brother’s soul had escaped this earthly plane. Then the phone rang verifying what I already knew. Mother had sent older brother Bob to identify the body. She just could not do it.

The nation was celebrating a special fourth of July. New York City (where I lived) harbor was filled with tall ships, the country was alive with joy. While my heart, my parents, his wife and two young children were consumed with a reality too hard to fathom. Had this man who was truly larger than life actually left this life?

When I arrived home at Tampa Bay, my usually youthful mother appeared old and bewildered. Dad was in shock since he and twin brother were together on a business trip when ‘the accident’ happened. Words only got in the way. There were only raw emotions.

Upstairs in Mom and Dad’s bedroom in Culbreath Bayou Tampa, we gathered as a fragmented family and explained to brother’s young son and younger daughter their Dad had died. My father was the same age as brother’s son when he lost his Dad. The similarity was stinging.

We all attempted to rest that night knowing the future activities would be challenging, at best. I awoke early the next morning and went into Mom and Dad’s bedroom. Dad was downstairs making breakfast and Mom was glowing sitting by her dressing table. Her youth and beauty had returned. I knew something magical had transpired. “Bill came to me last night as clear as you are here and told me he was ok and for all of us to care for one another,” she smiled. This would be the first of three ‘visits’ from brother Bill reassuring us he was where he needed to be and to care for one another. The other two ‘visits’ were in New York City, one in private and the final third while I was lunching behind St. Patrick’s Cathedral with a client who witnessed the event. 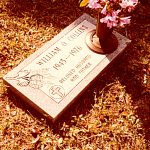 Reassured by her son’s spiritual visit, Mom wore a bright yellow suit to the service. We, as a family, went through the mechanics of an American funeral. Mom, Dad and I did not wish to see brother lifeless. But my partner at the time, Tony, sat with brother’s wife Babs at the funeral home for all the time she needed. He was the first in our high school class to die so young. I lost count of the hundreds of cars in the funeral procession or the volumes of flowers upon the grave.

In the truck of Mom’s car my older brother had put the clothes and glasses and personal effects my twin wore during his accident. I held these and for the first time cried. Years later, I would give the glasses and accident report to my twin brother’s children.

Leaving to return to my life and career in New York City was even more difficult than the first time I left home. Words only got in the way. 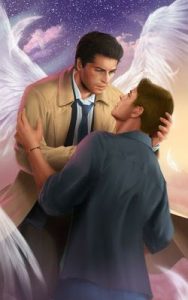 My first week at home I developed what appeared to be an acute flu. It felt like the life force was withdrawing from my body. My temperate hit 103 degrees as I laid lifeless in bed wondering if I was to join my twin. I refused medical help. I was ready to leave and rejoin the eternal journey with my twin. Then I passed out.

While on “the other side” I saw a vision of what my life was to become (PhillipEltonCollins.com) and that it was not my time to leave this world for another. Twin brother reassured me he was alright and pushed me back into this reality. I knew we would reunite later…

I woke up and the fever had broken, weak as a newborn, I began to nourish myself and resume my soul plan, my purpose in being here…

Long before he was husband, father and friend he was (is) my eternal twin brother and forever will be.