How We Are And How We Can Change

Humanity is hot-wired to think of one’s self first, often family second, and community or tribe third. It’s changing with increased communication and transportation but most think of the rest of the planet as a remote fourth. Much of humanity is programmed to think and plan into the future one or two generations at most. This offers a rather limited view of micro/macro reality or how best to plan for the present or future. It is time for expansion… 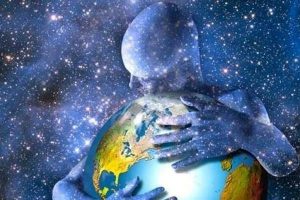 Not since Lemuria and Atlantis have humans been able to manipulate the biosphere outside and the human gene within the body. And as with the ancient advanced civilizations of the past, these abilities can have negative effects for many generations to come. Learning to love future generations (as a result of a healed relationship with self) is vital at this time.

Approaching our second decade in the year 2000, some seven billion people aspire to the standard of living set forth within the higher realm’s inspired founding papers of the United States of America. By the year 2050 that is projected to be 9.7 billion humans on earth. At present, humanity has reached a critical mass in material consumption affecting the climate and every life form on the planet by polluting the air, water, and soil. Humans dump and ingest multiple chemicals into the air, water and all bodies (including their own) without knowing the full short or long-term effects.

Learning to care about and have compassion for future generations will not be easy. The foundation will come from learning to love ones self and one another, while reversing an evolutionary pattern dating back thousands of years. It will require an unprecedented refocusing of sciences, technology and most important ethical and cultural standards. The needed paradigm shift in economics and politics requires a spiritual transformation on a human scale unmatched in the present or past. Rarely has one generation, as now, been given such a great opportunity/gift to change the present and effect the survival of the future.

Earth’s spiritual/consciousness transformation in process at present will allow transforming the foundation of the nation and world. The largest paradigm shift will be away from fossil fuels consumption and present military spending as people realize and apply that war does not work (with the capacity to destroy the entire world). This near destruction of the planet has occurred before and is engrained within humanity’s spiritual DNA. New research and investments will go into creating a hydrogen age and an electro-magnetic photon and crystalline age. Learning how to withdraw energy from these three sources will shift economic and political systems/structure and put less wear and tear on Mother Earth ensuring survival as a human species.

Uniting humanity over the long term rather than dividing it over short-term resources will reduce/eliminate the duality/separation and confrontation the world has experienced for eons. This will require not allowing special interest groups and corporations to control politics and government. Economics will be based upon long-term investments where cause and effect matters, reflecting cultural transformations: the women of the world and the youth are leading the way. As humanity evolves as a species, lower values on fortune and fame will occur with a higher value on spiritual experiences and expansion (things like creating loving/supportive communities, being in nature and creative expressions of the soul: the arts).

Being conscious of those in the future requires a deep examination of individual mortality and accepting the fact that one day humans physically die but eternally live in spirit. Being conscious of this reality allows individuals to prioritize how to use the energy gifted for each lifetime. Spiritual experiences connected to an awareness to transcend personal death are an essential pattern central in most human life. What humanity is in the process of being now is to augment ‘religious’ and secular experiences with a new normal human founded spirituality that allows humanity to transcend death by being connected to each individuals eternal being and future human generations, as well.

Within the truth that change is all there is one can now affirm that caring for the present is not enough. One shall take care of the future by dealing with it now (understanding that now is all there is and a change made in the present moment affects the future). Although the present quality of life has improved since the past, it is a bit of a long-term deceit. Humanity is currently experiencing the greatest mass extinction of species and future generations may feel the full effect of this. Abuse of the biosphere has not yet had its full effect on the planet and humanity but some big hints are now occurring. All of this requires shifting human behaviors that have been acceptable and often rewarded: the human divine right to reproduce, wage war and transform raw earthly materials into ‘produced’ products that may or may not be needed. If you so choose, through your free will, the time has come to choose co-creation over procreation, conflict prevention over making war and investments in the future over immediate consumption. Only through these choices can humanity survive as a human species living on the surface of a planet not fully realized as a conscious living being whose organs humanity continues to rape on a daily basis. 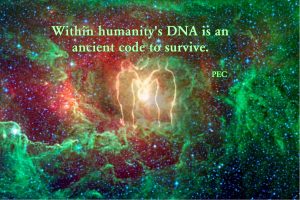 Within humanity’s DNA is an ancient code to survive. The ascension energy of the planet is now transmuting from a carbon-based existence to a crystalline one that is activating this ancient code and waking humans up from a deep sleep.

Fully understanding and applying wisdoms of the origins of humanity will be another game changer. Not all of humanity evolved from a primitive hunter-gatherer consciousness. There have been advanced civilizations from other worlds at work in the play of being human. This truth will engender a global consciousness and endeavors that include and expand beyond planet, solar system, galaxy, family, tribe or nation.

As individuated souls, there is both a little and a lot to do. This stems from the truth that the only relationship one has is the one with self, self being a reflection of All There Is. Each human has the self-empowerment ability to transform its self. Many higher realms teachings and tools are available to assist in this personal process. If enough people follow positive personal cumulative emotions, thoughts and actions, humanity shall transform everything person by person, community by community, nation by nation, intention by intention, and life by life. (Later in this endeavor, we shall discuss more how to’s…)