The divine inspired principles of The United States government came from higher realms, anchored in many ancient texts prior to the founding fathers of America receiving them. Visual symbols in the American emblems stand for freedom, liberty, equality and justice. The nation’s original motto: E Pluribus Unum, “Out of many one,” describes the origin and mission of the nation. This is a mighty mission that also echoes the purpose of the planet and a promise that is destined to be reflected throughout the world. All of this shows the interconnectedness of us all. The freedom of will choices we make are choices for everyone, the wisdom that unity precedes us and is a call from our ancient past leading to our future. The cosmic consciousness of interconnectedness merged through love to allow freedom birthed a new nation. A nation that is still a work-in-progress, which can be more fully realized by the balancing of the masculine and feminine energies (being led by the women of the nation). This imbalance is the basis for much of the duality, separation and confrontation in the nation and world.

WE THE PEOPLE, BY THE PEOPLE, FOR THE PEOPLE are words that awaken our consciousness to know the emotions, thoughts and actions of each of us can empower us to create and fulfill the divine promise of this nation, called “Amer- I- can.” It is time to put you being god back in government, and know “I can”.

The reality of religious/spiritual freedom of faith in America, where the national motto is “In God We Trust”, is strong, but the separation of church and state is also in place. We read of ‘Divine Providence’ in the Declaration of Independence and there are images of angels and divine light that abounds throughout the architecture of Washington, DC. Congress is called to order with prayer and meditation each session, a divine call for higher consciousness to carry out the people’s business servicing their highest good. But our country is as divided as it has ever been at present. It’s now hard to see any angels at work. We are the creator creating all the time and emotions, thoughts and prayers are creating our reality. Right now, we are looking to re-establish faith in ourselves, our constituents, faith in something that transcends our condition, some higher awareness that we can achieve (to re-found our democracy). What is needed now is more understanding through consciousness that comes from spirit when we truly connect with it and ask for that consciousness.

Let us affirm that the power of unity, of intention/prayer (and purpose), a more perfect union, be our mantra. America is an essential aspect of the ‘uni-verse,’ one song, filled with the possibilities and probabilities of divine order. But it ain’t perfect yet.

Higher realms infused our founding papers and the Capitol with the ‘spirits of everyone’; not just those elected to serve but all Americans, super charged into the architecture and spirit of America. Let us find our way back to the true connection to spirit (independent of religious dogma created by others) and learn to access it through ‘thinking’ with our hearts, not through some hidden agenda. This era is the time to access and apply the higher consciousness of the “Amazing America,” a gift from you being the gods to be the light of the world. This will allow the ‘re-founding of America’ and reconnecting to the higher realm’s wisdoms that created this divinely appointed nation. We came from light and are in the process of returning from whence we came…

Right now, it is essential that we be conscious of what is going on and what is needed to transform things. Pay attention to our ‘divine discontent,’ which is the language of spirit; ask yourself “what can I be and do to assist in creating what I love”, moving beingness into doingness (pray but move your feet too). And know in your heart, “Yes, I can”; Ameri-I- can (knowing our emotions and thoughts create our reality all the time). Make your decision in the present to change things, not in the future (which may never happen). By knowing who you are and why you are here (the foundation of human life), the what, how, when and where will manifest.

Right now, the heart of our nation is aching; instead of unity there is imbalance of right versus left (not realizing they are aspects of one another). WE THE PEOPLE are separated from the very government that is a reflection of us. Government is the creation of the human community to come together for social, cultural and economic purposes. What we are currently experiencing is in effect an attack on ourselves (self-sabotage), an anti-democratic era threatening our very principles with a tyrannical, authoritarian rule, the result of corporate control and concentrated wealth. With so many not understanding the constructs (check and balances) of our democracy, we have become alienated from our inalienable rights. Drifting in an untrusting nation, people lose trust in the government while the government has lost its trust in the people. What then happens is government loses its legitimacy, and special interest groups assume control. 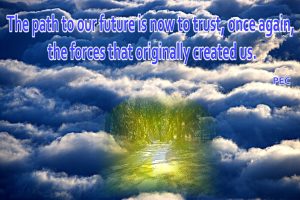 With the assistance of higher realm wisdoms, we need to recreate/re-found our nation through our higher awareness/consciousness and employ dedicated spiritual practices that can lead us back to the original creation of this nation. This re-transforming and re-founding will come from the power of the human heart, as we learn ‘to think’ with our knowing hearts and allow our believing minds to surrender and move back in service to our hearts.

It was trust in the innate inner wisdom from higher realms that empowered our Founders to create beyond any known government principles of extreme goodness in an extremely cruel world. The path to our future is now to trust, once again, the forces that originally created us. We need to remember and reclaim our spiritual heritage and the highest ideals that spark from it. Ascended Master St. Germain, having been instrumental in the creation of The United States of America, has laid out a program of Discourses and Dialogues to assist humanity.

In the last century, over 100 million individuals were killed in wars. Now approaching the third decade of the 21st century, duality, separation and confrontation is an ever-present theme in the world in almost every aspect of humanity. Real or anticipated conflict has become a daily part of the human experience and glorified in films and books. Our language and national and foreign policy dialogue is infused with ‘war-words‘: war on drugs, war on cancer, war on illiteracy, etc (what we resist persists). War words fill sports and video games. Media allows living the up close and personal, horrifying aspects of war. Our children see more death by the time they are ten-years-old than most in the past saw in ten lifetimes. Founding Fathers, yes, created provisions for our defense, but they would surely be horrified to see we have transmuted into unconscious conquering comrades. The world has lived in war for a long time and living together in peace largely remains promising lyrics in a song.

It is time, if we so choose, to free ourselves from ourselves and transform the past into a new paradigm. Peace can only come through a higher ascension/evolution of human consciousness, not just through mandated absence of violence. Through transformed consciousness, we can awaken understanding, compassion and love. The task will be to transport our higher consciousness directly into those we choose to lead our governments, by governing government itself. Instead of a department of war, let us create a department of peace – and put the same energy and resources into peace that we do war, where violence and war become old paradigm, truly unacceptable and unavailable. 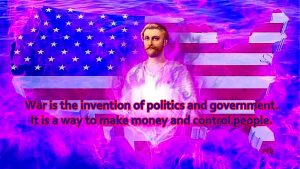 War is the invention of politics and government. It is a way to make money and control people. Our greatest challenges are spiritual at their core: an unhealed relationship with self, misuse of power, acute materialism, and not understanding who we are as human beings. Governments need to transition to a higher level of emotions, thoughts and actions in order to become the conveyor of consciousness for the country.

Reading the Founding Fathers papers you see they knew the material foundations of an enduring democracy are activated by unseen, immaterial means. They knew the mission of this nation was to transport spiritual wisdom into the material world, and in spiritualizing matter; emotions, thoughts, words, and actions, we reconnected with our divinity. Then all matters return to the purest form of Divine Order…