WHY IS THERE SO MUCH EVIL IN THE WORLD WITH A GOOD GOD?

Every since humanity could think and communicate we have been asking why is there so much evil (bad) being permitted in the world when the lofty purpose of life seems to be that there should be only good.

Looking at human history and current events, we know full well the consequences of evil (live spelled backwards) behavior (war being one of the worse). Humanity’s own negative emotions creating negative thoughts, bad passions and deeds must share the responsibility (responsibility=consequence). 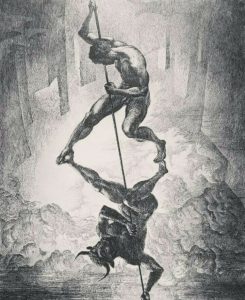 The type of evil which is so prevalent at present glorifies not telling the truth, brutality for its own sake, justifies oppression for the oppressor’s sake, honors greed, ridicules ancient spiritual wisdom, and derides conscience, as much for the pleasure it gets from these activities as for the rewards.

The people who practice the above love it as intensely as the most religious love God. Upon deeper examination of the human condition it has become self-evident that the wrong/evil/bad of human conduct arises because evil/negativity is a real core element in human beings that can be independent of our environment and/or circumstances. Although this behavior is most often the result of core inner wounds (from past and present life experiences) and primary ego defenses around those wounds acting out.

Since our media and verbal communication with one another most often focuses on the negative it is unfortunate that the negative human element ‘appears’ to assert itself more easily and more frequently than the good.

So, here’s the hot topic question we have been asking ourselves for eons: Why does the Higher Power (call it God, Source, ALL THERE IS, etc.) who is universally regarded as beneficent allow these evils and horrors to threaten humanity? And here’s another question we metaphysicians ask: What is the purpose in these negative behaviors in relation to the purpose of being human. Since God is love there must be a positive reason for the negative to exist!

Applying the gift of free will and choice in being human it becomes clear we cannot fulfill our purpose in being human (to learn to love) without permitting all such experiences. Through this choice each of us is allowed to fulfill moral, intellectual and spiritual self-consciousness. To limit our experience to non-evil would render impossible the full achievement of human self-consciousness.

The truth and fact are there is no other way than this ‘soul directed’ existing one in which humanity could have found all the conditions necessary for the development of all our needed learning tools to access our divinity (our higher self). These present circumstances are insuring our permanent healing and evolution.

The bottom line is that no mode of conscious life could have been devised which provided uninterrupted happiness and unlimited goodness at the same time that it provided the varied experiences necessary to develop wisdom, intelligence and spirituality of we human beings.

Only by providing a full course of changing experiences which took a wider more diversified path that also included the opposites of suffering and evil could the full complete evolution/ascension of humanity have been achieved. The vivid contrast between good and evil makes us much more conscious between the two choices, allowing us to see the meaning and value of the higher one. Without the experience of both to contrast one another, we cannot distinguish good from evil, light from darkness, bliss from misery and truth from non-truth.

Good becomes significant to us only as it stands in contrast to evil.

There could have been no manifestation of a universe without this play of opposites running completely through it. As soon as the “One” became Two”, it all began. Thus, birth and death appear everywhere in the universe, good and evil, pleasure and pain in humanity. 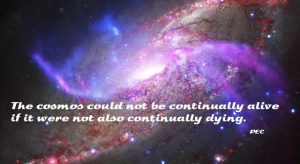 We metaphysicians have known for eons that creation is inescapably an interplay and interaction of creative constructive and destructive forces. The cosmos could not be continually alive if it were not also continually dying. The interplay of these opposing forces is an eternal movement which is reflected in the birth of stars and the death of our microscopic cells. Only a static motionless universe could have avoided this life/death dance.

Since humanity is not a rabid robot, we had to be free in our will, within the limits of our physical nature and universal laws. We had to be given the power to choose (this is the God-force within us). And if we were left free to choose good, we had to be free to choose evil. Through life’s lessons we are learning to act rightly and this dark phase in our evolution will soon not be necessary as our consciousness rises. Only through this divine experiment with evil could the eternal value of good be permanently realized.